JF and her husband were finally ready to renovate their kitchen. In the 20 years they had lived in their house in Washington DC, work was done on other areas.  Now it was the kitchen’s turn. Half the appliances no longer worked, there wasn’t enough storage and the lighting was dim.

Early on, the decision was made to keep the same basic footprint. No walls would be knocked down and the plumbing would stay on the same wall. JF also wanted to add an island.

Like many people, it’s hard for JF to visualize something that she can’t see. So my design partner – Liz Johnson –  and I suggested that she leaf through magazines and browse the Houzz website. She fell in love with one kitchen, and that inspired her design.

Even though we had a starting point, many decisions remained. Remodeling a kitchen requires thoughtful and precise planning, as well as constant communications and collaboration between the designers, contractors, suppliers and homeowners. 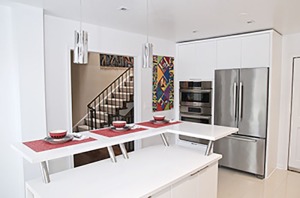 What was done: The biggest decision was how to fit an island into the kitchen. At our recommendation, the cabinets and cooktop on the wall adjoining the hallway were removed and the door was widened. That freed up the necessary floor space for an island. JF’s husband also wanted a raised ledge at which he could sit and eat comfortably, preferably in glass. But glass proved unworkable, given the amount of overhang he wanted. In the end, an L-shape ledge in the same white quartz as the countertops was added. 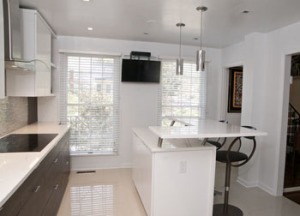 One by one, materials were selected and installed and checked off the list: the flooring, the sink and faucet, the backsplash, the pendant lights and even the number and placement of the recessed lights.

Little things made a huge difference in the design and functionality of the kitchen. For instance, all of the electrical outlets were installed under the cabinets rather than on the walls. And the door to the pantry (next to the refrigerator) was changed from one that swung inward to two half-doors that swing outward.

The new kitchen is stunning. For the first time, the homeowners have been hosting dinner parties in their kitchen.